AdBuddiz is thrilled to announce an official partnership with Corona!
The AdBuddiz plugin is now listed in the Corona Marketplace.

Our teams will work hand in hand to provide continuous support to the developers using the plugin!

About Corona
Corona SDK is a cross-platform mobile development framework chosen by 300,000+ developers around the world to create their hit mobile apps.

January is the peak month of activity for mobile apps. Is your app ready? Check our article on ad placement.

We wish you a peaceful and lucrative holiday season as well as a fantastic year 2016!

Come say “Hello!” November 18th  at the 7th annual Appsworld conference held in London, UK! We invite you to join us as we explore the current and future trends within the mobile world. We would love to speak with you about our latest innovations and the possibility for future partnerships.

Feel free to contact us at [email protected] to get in touch prior to the conference.

Join us October 28-30 at Game Connection Europe!  We are looking forward to having drinks with existing and new partners.

Feel free to contact us at [email protected] to get in touch prior to the conference.

Where: Berlin, Germany at the Grand Hyatt Hotel
When: October 16, 2015
About the event: http://mobilewebtainment.com

AdBuddiz is pleased to announce that we will be attending this year’s Mobile Webtainment Conference in Berlin, Germany. This 2-day event is ideal for those looking to network, who are interested in, or currently involved in the mobile industry.

You can look forward to learning more about who we are and what we do, as our CEO and Co-Founder, Jonathan Ferrebeuf speaks about our history, as well as our journey towards our Real-Time Bidding (RTB) model. He will outline several topics including, but not limited to, the Pros and Cons of RTB, its impact on AdBuddiz, and monetisation lessons.

Please feel free to join us Friday, October 16th, from 17h30 - 17h55. We will also be available to take questions or meet with potential partners throughout the day. Feel free to contact us at [email protected] to get in touch prior to the conference.

We are glad to announce that a new Community Plugin is available for OpenFL - Haxe on the Android platform.

We hope that many developers will enjoy this new extension graciously provided by Haza Haza.

Feel free to send us your feedback!

On March 20, a 7 year-old’s dreams have been crushed. When asked by his teacher the age-old question of ‘What do you want to be when you grow up?’, the son of TechCrunch senior editor Matt Burns, dressed proudly in his Minecraft T-shirt, said,

And guess what? He was told off by his teacher that it’s not a ‘real job’ and was excluded from his school’s career day.

As much as we share his dad, Matt Burns’ fury, the sad truth is, this teacher is not alone in her backwardness regarding career choices. It is popular belief among many that the gaming industry is not a serious business.

‘What do you mean you work in games?’

‘You play games all day?’

Game development is no child’s play.

Developing a game is hard work. Making a game that’s fun and addictive involves blood, sweat and tears. It requires not only creativity, but also planning, meticulous calculation and analysis, all of which are usually done by a whole team of talented professionals - game designers, graphic designers, engineers, analysts, marketing…the list goes on.

There is real (big) money.

Most people don’t think game development is a serious job because they don’t understand the business model. Just because people downloaded and played Candy Crush for free doesn’t mean there’s no money generated. Television is free, and nobody judges the actors and actresses for not doing a ‘real job’. We all know it’s a ludicrously good business. It’s the same for the gaming industry.

As fellow developers and game lovers, we know that thousands of developers make their living on creating amazing games to bring joy and excitement to everybody. It is a huge market that is bringing a lot of business and employment.

The maker of Candy Crush, King, was valued at $7.08 billion last year. And why else would Supercell have spent a whooping 9 million dollars on a set of commercials with Liam Neeson for Clash of Clans if they are not making money?

With mobile phone usage skyrocketing, the business has a lot of room for growth and a sparkling bright future ahead.

At AdBuddiz, we see developers making a living through creating games that they are proud of and passionate about every day. We know that it is a viable, rewarding business. So, teacher, just because it’s fun doesn’t mean it’s not a real job.

All developers, be them first time newbies or app developing gurus, have come across this crossroad at one point or another.

Come on, iPhone and iPad users are richer

Common wisdom among the mobile app developers and publishers has it that while Android has an ever growing market share, iOS apps are more profitable. iPhone users are richer; they earn more; they spend more on apps and in-app purchases. The advertising rates are higher.

Does that mean it’s a no brainer then? Go for iOS first of course!

Not so quick. If we take a look at the data released in February 2015 by Opera Mediaworks, we’ll see that Android doubled its share of ad impressions worldwide, far exceeding - in fact, tripling - that of iOS.

Although we see that iOS still has a higher revenue share, we must not forget that advertising rates are between 20-50% lower on Android devices. So when all things are taken into account, some Android apps are as profitable (if not more) as iOS apps. The Android revenue share is also clearly on a growing trend. 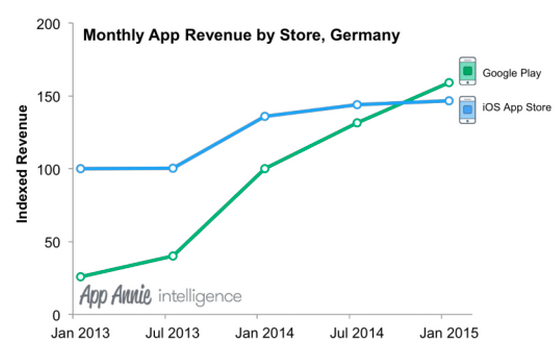 In fact, in certain countries like Germany, the monthly app revenue on Google Play has exceeded that on iOS.

But of course, money isn’t everything…

Needless to say, revenue and profitability shouldn’t be the only considerations when deciding where to launch your app first. Other things must be taken into account. E.g. Development environment, configuration, language: Are you more comfortable with Java or Objective-C?); Publishing: would you like to have your app publish quickly - with the risk of being booted from the Play store later  - or endure a month-long wait for the stamp of approval (or disapproval) from Apple?

What do you think? What other considerations do you have when deciding which platform to start on? Drop a comment to share with us your thoughts!

Asia accounts for 48 percent of the total global games market. In order to succeed in your mobile games marketing in Asia, it is crucial to know the numbers and figures and understand the key specific characteristics in each of your target countries. Just before you start investing all your time, money and effort in joining the ranks of game studios trying to break into the Chinese market, it may be worth your time to take a look at this Newzoo report: 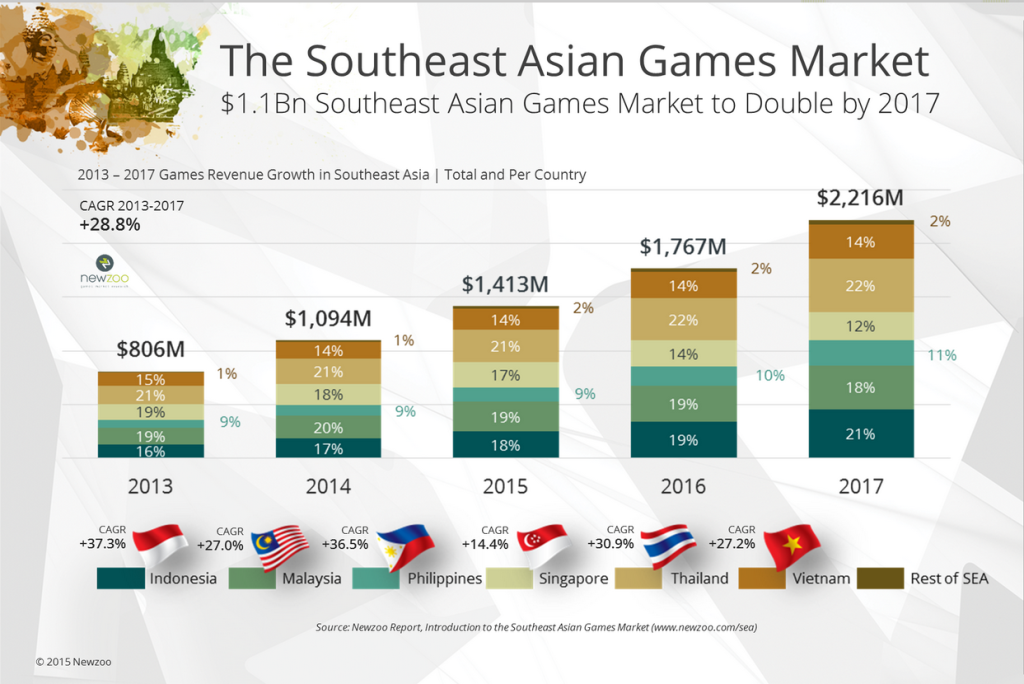 Southeast Asia isn’t getting the attention it deserves

Thanks to the rapidly growing economic development and dramatically increasing internet-access rate, Southeast Asia is one of the fastest-growing regions for gaming. In just 2014, Indonesia, Malaysia, the Philippines, Singapore, Vietnam and Thailand spent $1.1 billion on games, and the growth shows no sign of slowing down; quite the contrary in fact, as Newzoo estimates a continued annual growth rate of 28.8%, doubling spending to $2.2 billion by 2017. Much of the growth is brought about by mobile usage:

“Between 2004 and 2014, Internet access in the Philippines grew more than 800 percent, the fastest rate in the region due primarily to the boom in mobile internet.”

By the same logic, it should come as no surprise that mobile games are catching up with PC and MMO games in terms of spending and revenue generation:

“Vietnam is quickest on this trend, with mobile-phone games seeing a compound average growth rate from 2013 to 2017 of 87.7 percent, becoming the biggest segment in terms of revenues by 2017.”

One driving force of this rapid growth is the metropolitanization of these Southeast Asian countries. As more people migrate to cities, more people get access to the Internet and many of them start playing games.

According to the report,

“The sheer size of the Southeast Asian population, and its rapid rate of urbanization of 1.4 percent average annual rate of change compared to China’s 0.5 percent, and its young and tech-savvy demographic, are all factors favorable for growth.”

The cherry on top? Unlike in China, there’s free and unrestricted access to Google Play in these Southeast Asian countries. In order to really succeed in these regions, however, it may be worthwhile to spend some time looking into localizing your games to adapt to the very diverse and distinct cultures of these specific countries, and taking language barriers and mobile usage habits into account.

So what’s the takeaway? Next time you think about where to launch your next game, or where the hot Tier 2 market opportunities are for you to expand your games’ reach in Asia, don’t forget to take this data into consideration! ;-)

We’d also like to take this opportunity to meet up with developers, mobile advertisers, journalists or influencers - feel free to drop us a line to schedule a meet up at [email protected] with the email titled “Meet up at MWC 2015” !